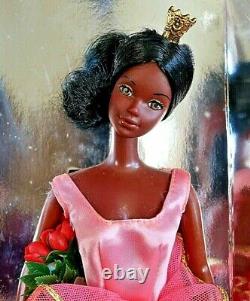 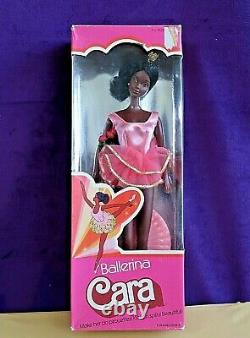 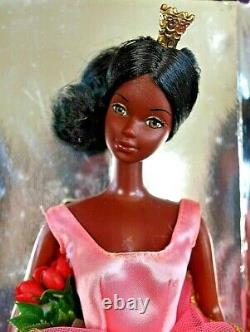 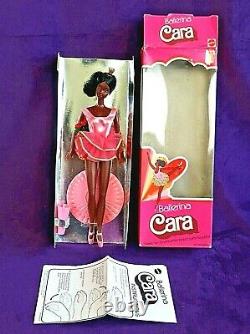 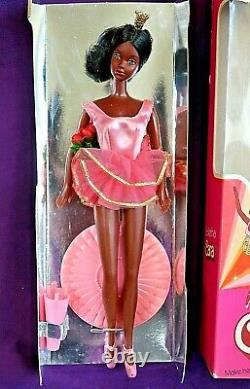 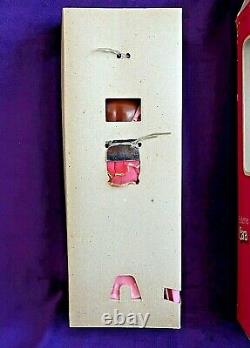 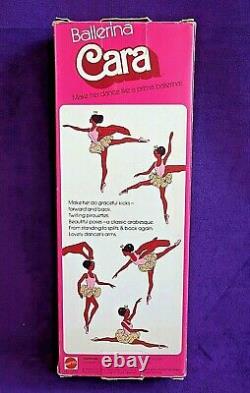 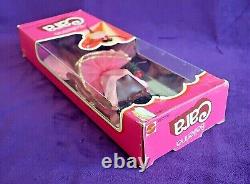 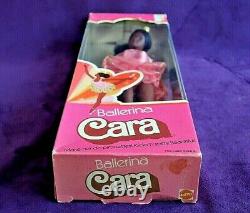 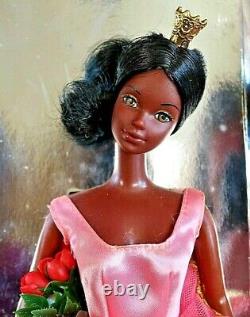 Here's a lovely, very rare doll from 1976, Ballerina Cara! Long before Misty Copeland, Prima Ballerina Cara led the ballet troupe through all the difficult passages en pointe! Cara has the desirable Steffie head mold that was used on some of the prettiest dolls of this mid-70s era. Ballerina Cara was only available during 1976, and Cara has never been taken out of the box by me; only for the photos here did I slide her out of the box.

She was left tied to the liner, and slid back in. She wears her original pink tutu, gold crown, has her bouquet of roses, and pink posing stand. The original instructions are also inside the box. If you have a question that I haven't answered in my description, please ask me.

Cara looks very pretty with her hair in the original set and wired to the box liner. Some of my photos accentuate dust specks; I did gently wipe her face off.

Her costume looks great, but I suspect that her pink tutu's top has faded a bit from the original color, as the pink satin Mattel used tends to fade. There is a tiny dot of soil near the left bust dart on the top; this is a light spot smaller than a pinhead, and it doesn't really show up in my photos. There are a couple darker spots on the tip of her toe shoes, from rubbing against the box; you can see this in pic #5.

I think those would clean off pretty easily. Cara's rose bouquet is wired onto her waist. Her pink 2 piece stand is in the bottom of the box, and the original instructions are also there. As you can see, the box is in Excellent condition ; it does show some signs of age and edge wear, but it displays Cara nicely. She has been stored in a dry, dark closet for the past few years.

On the top of the box front, just to the left above Cara's crown, the cardboard of the box has a "point" that has gotten folded back and creased. There is a tiny tear in the paper edge near that point. Some of the other "points" of the cardboard part of the box above the doll are a little dog-eared. If you enlarge the 2nd pic, you can see this. The upper left corner of the box front also has a light crease. There is a paper peel in the upper right corner from the price tag being removed. The plastic window of the box looks pretty good, it hasn't yellowed at all. There are some faint scratches in the plastic window, and there is some glue residue on the window, just to the upper right of the doll's head. It looks like it will come off, but I didn't want to risk damaging the box. There are a couple other spots here and there on the window, but it doesn't distract from the doll.

The back of the box looks good and has graphics of the doll kicking and pirouetting. The white background of the doll illustrations is an aged off-white color. The short top end of the box looks good, but there is a little wear on the back corners of the top flap, and a slight crease at the rear right corner of the flap. The silver reflective liner of the box is intact; the doll is wired to it at her waist and also around her hair. There is some light spotting on the upper portion of the reflective liner, you can see this in most of the close-up head shots of the doll.

Most of the spotting seems to be mainly in the upper portion of the liner; there isn't much spotting below the doll's shoulders to the bottom of the box. Ballerina Cara will look beautiful in your vintage doll display! Please see my other auctions for vintage Barbie doll and clothing lots, and for other vintage toys from the'50s-'70s. The item "RARE 1976 NRFB Vintage BALLERINA CARA Barbie Doll Steffie Face AA Beauty BIN" is in sale since Wednesday, September 30, 2020. This item is in the category "Dolls & Bears\Dolls\Barbie Contemporary (1973-Now)\Barbie Dolls\Other Contemp.

The seller is "roza1494" and is located in Seattle, Washington. This item can be shipped to United States, all countries in Europe, Canada, Japan, Australia.